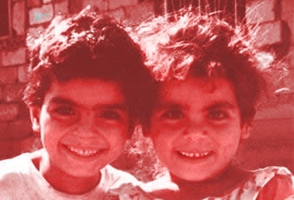 Society for Relief and Development

HUMANSERVE is partnering with the Alberta Office of the Mennonite Central Committee to sponsor a family of Syrian refugees for resettlement in Edmonton, Alberta, Canada.

The family of seven (father, mother and 5 boys, ages 5 to 13) were languishing in a refugee camp in the Bekaa Valley, Lebanon from 2012 to 2021, after they fled war-torn Syria. They were occupying a small partitioned tent in a crowded camp with no running water, proper sewage or safe way to provide heat in winter.

In preparation for the family's arrival and post-arrival settlement, HUMANSERVE has been collecting funds and in-kind donations to support their housing, furnishing, clothing and miscellaneous needs during their first year in Canada.

Click here to learn more about this project and how you can support our efforts....

Humanserve aims to improve the quality of life of Palestinians, refugees and disadvantaged people in Lebanon, the West Bank and Gaza.

Humanserve educates the Canadian public about the plight of refugees and disadvantaged people in Lebanon, the West Bank and Gaza.

Humanserve raises funds to support its projects overseas and operations in Canada.

Click here for more information and how you can help with their resettlement in Canada.

Click here to fill out the form to become a part of the HSI team or to renew your Annual Membership!

More than a MILLION $ sent Overseas! See Past Projects for new totals.

Subscribe to our eNewsletter for alerts about upcoming events and other Humanserve news.

See Archive of past eNewsletters

HSI utilizes the web-based services of Mail Chimp which maintains the database of all subscribers to our newsletter listserve. Click here to review the privacy policy of Mail Chimp.

HSI will not sell or share your personal information or e-mail address with any person or group.

You may unsubscribe at any time from the list by selecting "Unsubscribe" on any HSI message sent via Mail Chimp.